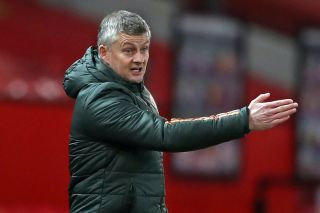 As Mauricio Pochettino rides off into the Parisian sunset, spare a thought for Ole Gunnar Solskjaer.

With the ex-Spurs boss set to return to the dugout at the French giants (via Sky Sports) – a job where it is difficult for him to fail – it ends the long-running narrative of the man from Murphy becoming Solskjaer’s Old Trafford successor. As news of Pochettino’s appointment at the Parc des Princes emerged over the weekend, there can be no-one more delighted at the news than the United boss.

Pochettino had appeared on Monday Night Football only a matter of weeks after Solskjaer’s United were humbled by their former charge as we suffered our joint-worst Premier League defeat. It was a situation tinged with irony as Jose Mourinho – replaced by Solskjaer at Old Trafford – seemed to have hammered the final nail into his successor’s kiste. In doing so, the stars were aligned for Pochettino, in turn sacked by Spurs to pave the way for Mourinho, to take over at United. It was a chain of events eerily similar to when Mourinho himself was waiting in the wings for what seemed like an eternity at the expense of Louis van Gaal, as the appointment of the Portuguese in M16 became football’s worst kept secret.

Solskjaer’s United doused the fire with four straight wins to quieten the crescendo, but the club’s board only added fuel to the flames as they sounded out the Argentine, according to Manchester Evening News. Even up to the start of December, as the Reds crashed out of the Champions League, the spectre of the lurking Argentine continued to hang like a shadow over Solskjaer.

Despite Solskjaer steadying the ship, it was a spirit that never truly went away. With Pochettino available and keen on taking the job, as per The Athletic, United were only ever a ban run of form away from pulling the trigger on the affable Ole. In the pressure cooker, precarious, results-driven world of football management, particularly at one of the land’s biggest clubs, Solskjaer seemed a man walking a permanent tightrope.

Pochettino had become a distraction, the elephant in the room, the man who refused to go away after every wrong turn. His appointment at PSG will be a positive for both United and Ole. It means Solskjaer is under less pressure, and it’s no longer a stick to beat him with after every poor result. Events over the last 24 hours can finally put the rumours to bed. Not only was Pochettino a constant threat, the lack of any other tangible alternative – with the possible exception of Max Allegri – made it seem a case of when rather than if.

It must have been unsettling for Solskjaer, and who knows what affect this had not only his state of mind, but also in the dressing room. Discipline would be hard and knowing the club were publicly flirting with the object of their affections in front of the world, only added to the perception that he was living on borrowed time. But the club stuck by Solskjaer, they believe in the long term project and want to give a club legend the time and resources needed to turn United into serious contenders for the major honours. There are tentative signs this belief is turning to fruition.

Of course, there’s nothing to say Pochettino still won’t be a United manager in the future. He will end his search for silverware at PSG – the one thing missing from his CV, and could well go on to become an even better manager there than he already is. Our chances of eventually getting him are enhanced by the fact he’s gone abroad, rather than somewhere like Manchester City, for example. Pochettino enjoyed the challenge of punching upwards at Southampton and Spurs – a job description very different from the glitz, the glamour and the mega riches that await him in Paris. He thrived on upsetting the applecart and disrupting the Status Quo. United perhaps felt like a more natural fit, well suited to Pochettino’s penchant of micro-managing young players, building teams, modernising a club and instilling a style in his own image. He may well get the chance to do that in the future.

But right now, with United in the mix at the top of the table and on a run of exciting form, there is no need to make a change. Solskjaer deserves his chance to try

If the timing is right, Pochettino is sure to be a contender further down the line, in four or five years time perhaps. But right now, Solskaer is the man, he is there by rights for the long term, no longer the glorified stand-in simply keeping the seat warm. If anything, Solskjaer’s hand has been strengthened by Pochettino’s return to management.

Just as Van Gaal failed to shackle the ghost of Mourinho, Solskjaer has banished, for now at least, the spectre of Pochettino.

One response to “Opinion: Ole Gunnar Solskjaer has banished the spectre of Mauricio Pochettino”