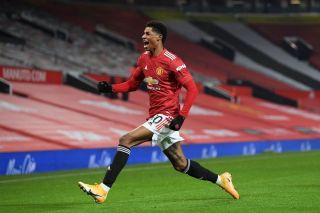 Welcome return for right-back in place of missing Victor Lindelof and he defended well without showing any ambition on the ball. 5

Great recovery pace to make key interceptions and used possession prudently. Justified inclusion ahead of Axel Tuanzebe after Lindelof was ruled out. 8

Urged teammates to move the ball quicker but didn’t get a response. Clumsy moment to concede dangerous free-kick in first-half. 7

Afforded plenty of time in final third but couldn’t find Cavani with a glut of crosses. Substituted at half-time for Luke Shaw. 5

Lacked intensity as United lost the midfield battle to Ruben Neves and Joao Moutinho in first-half. Covered well for Maguire on occasion. 5

Tried to take risks but quality wasn’t there. Axis with Matic wasn’t effective but United were more potent with the Frenchman occupying more advanced roles. 6

Should have scored his 15th of the season after Greenwood’s cross. United weren’t threatening and their talisman takes some responsibility. 5

United’s brightest spark in first-half without cutting edge. Drifted after the break despite no lack of effort but provided the winning moment. 7

Superb cross for Fernandes almost lead to United’s opener but otherwise couldn’t make impact from the right and subbed early in second half. 5

Isolated and feeding off speculative crosses throughout. Scored disallowed goal. 5

Brought on to provide a match-winning moment but wasn’t afforded chance to deliver. 5