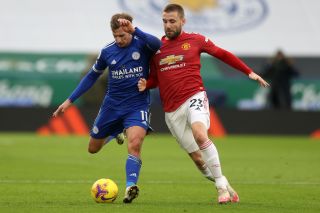 Luke Shaw seems to get better year after year — and has been at Manchester United for six-and-a-half years.

The former Southampton left-back has been incredibly unlucky with injuries at points, but as well as that he’s been very consistent despite increased competition in his preferred position from new signing Alex Telles.

“I’ve been here a while now and I know what’s needed here,” Shaw told the Wolves edition of United Review.

“I’m one of the more experienced ones in the changing room. I feel like I can help out with some of the young lads. I know what they’re going through and I know I can give them advice that’s needed to help them push on. It’s nice that I can be one of these people who, having been here for a while, that can give more in [sic] the dressing room.”

Looking back on a very strange 12 months for the world, with COVID-19 outbreaks and lockdowns, Shaw added: “I don’t think we’ll have a weirder year than we have this year. We had a lot of time off which was very different. Of course it was time to relax and enjoy some family time which was nice because we couldn’t even move out of the house really. But I think it also showed how much we missed football and how much we love football because it was really hard without it.

“I think I can speak on behalf all of the lads and say we were all missing it very much and I’m sure the fans were as well. It shows how much football means to us and it’s just nice to be back. With what’s going on now and COVID still being quite bad, it’s just nice to still be able to play.

“Personally, of course, having a young, little child running around the house is indescribable; it’s been amazing!,” he added. “Football-wise there have been a lot of ups and downs but, as we come into the back of the year now, we’re starting to see improvements and hopefully we can maintain some consistency and improve into the new year.”

Next week United have two cup competitions to focus on — with a Carabao Cup semi-final against Man City hanging in the air at the moment, and an FA Cup third-round tie at home to Watford.

United suffered three semi-final heartbreaks last season, so this time Shaw and the lads want to get an extra step or two further this time around.

We can’t allow it become a thing that we struggle whenever we reach the semi-finals and it’s certainly something for the manager to overcome this term.

“Yes of course. No team wants to say we were going in the right direction but lost three semi-finals,” he said. “From a team perspective it [getting to them] was definitely an improvement, but it’s not good enough losing them.

“I feel like the experience of those made us realise what we need to improve and what we need to do to take that extra step. Hopefully now we’ve learnt. Right now we’re in a really good moment and we just need to keep going and keep working hard, and I think we’re in the race for the title too.

“It’s crazy this season; it’s very close. If we win our game in hand we’re maybe only a few points behind first and especially over this Christmas period if anyone wants to mount a title charge then now would be at the time to do it.”

Shaw offers more defensive security than Telles but lacks in the attacking department where the Brazilian thrives. It’s good that Ole Gunnar Solskjaer has competition from different types of left-backs in the squad, not to mention Brandon Williams, who can play both flanks in the full-back role.