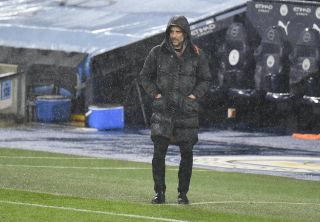 Manchester City’s fixture schedule faces some uncertainty after their game tonight against Everton was postponed.

City confirmed on Christmas Day, as per Sky Sports, that right-back Kyle Walker and Gabriel Jesus had tested positive for COVID-19 after a coronavirus outbreak hit Pep Guardiola’s squad.

Further tests on Monday morning resulted in more positives and they felt it would be best to ask the Premier League to postpone the game against Everton.

City have also confirmed that their training ground will remain closed for a period of time in an effort to stop the spread of the virus. Not playing tonight could have the same effect.

This could potentially bring uncertainty to other clubs if the spread continues throughout the UK with new variations of COVID-19 now being tracked by the authorities.

A statement said via Man City’s official website: “All positive cases involving players and staff will observe a period of self-isolation in accordance with Premier League and UK Government protocol on quarantine.

“The first team training ground at City Football Academy will close for an indeterminate period, with the squad and associated bubble undergoing testing before any decision is made for training to resume.”

This comes as a big time in City’s season, with Guardiola’s side set to face Chelsea on Sunday before the Carabao Cup semi-final against Manchester United on the following Wednesday.

Both of these games fall within the 10-day self-isolation period for anyone who tests positive, meaning our the scheduling around our upcoming League Cup match-up is under doubt.

In earlier rounds of the Carabao Cup, teams who were unable to fulfil a future were forced to withdraw from the competition. This is what happened to Leyton Orient — allowing Tottenham Hotspur a bye into the fourth round.

That won’t happen next week, so there’s no bye into the final on the cards…

The rules also specifically reference the semi-finals stating “reasonable endeavours” will be taken to rearrange the fixture “at the earliest reasonable opportunity”. Only if that’s not possible would an abandonment be considered at which (unlikely) point #MUFC would go through. pic.twitter.com/6eXeXWFETd

The rules state that the rule forcing clubs to withdraw from the EFL Cup if they cannot fulfil a fixture was only in place until the fourth round.

It looks like our semi-final with City will be rescheduled.