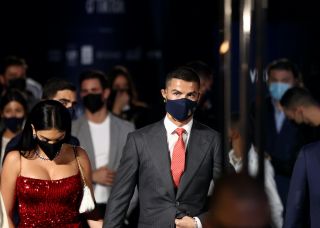 Cristiano Ronaldo has been named ‘Player of the Century’ at the Globe Soccer Awards ahead of longtime rival Lionel Messi.

The Portuguese superstar was named the winner of the award in Dubai on Saturday afternoon after being recognised as the best player between 2001 and 2020.

Ronaldo already has five Ballon d’Ors, so this is yet another big accolade to add to his individual collection.

He was visibly delighted when handed the award, as seen in the via below via @Globe_Soccer.

Ronaldo made his name at Manchester United between 2003 and 2009 when he emerged as one of the world’s top players. He sealed a then-world record transfer to Real Madrid and took his game to the next level while playing in the same domestic league as Messi.

This became one of the greatest times to be a La Liga watcher – except if you hated Barcelona because they dominated with Messi.

Ronaldo left Madrid for Juventus in 2018 and he remains a key player for the Italian giants.

Both Ronaldo and Messi have pushed each other on for years — and, as a duo, it’s hard to argue against them both being the best ever.

This year we sadly lost Diego Maradona, another great of the game.