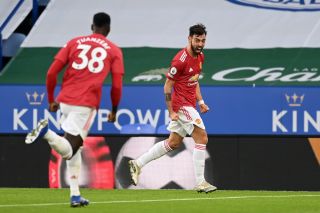 One of the biggest fears for Manchester United fans this season is being without Bruno Fernandes for a sustained period.

According to Rene Meulensteen, who was a coach under Sir Alex Ferguson at Old Trafford during the most successful period in the club’s history, United can ill-afford to lose Fernandes but says Paul Pogba or Donny van de Beek could fill in if he’s absent.

Fernandes, 26, joined United a year ago and made an instant impact. He’s been directly involved in over half of United’s Premier League goals since his debut.

There is no denying that United are heavily reliant on Fernandes’ creativity and they could still find themselves in a title race this season.

“I think United can only have one New Year’s Wish and that’s for Fernandes not to get injured or suspended,” Meulensteen told Stadium Astro.

“His energy is unreliable. Look at this goal again — it’s absolutely fantastic. The timing of the run and ball from Edinson Cavani is fantastic.

“As soon as Fernandes gets on the ball the likes of Marcus Rashford are on their way. Fernandes is just som, so important for United. He gives them rhythm, he’s a winner, he’s a leader, he creates assists and he scores goals.”

Van de Beek has not got the game time he would’ve hoped for when he first joined United in the summer, but that could change as early as next season if United decide to sell Pogba, who is engineering a move away from Old Trafford according to his agent.

Meulensteen thinks Van de Beek and Pogba can fill the void potentially left by Fernandes were the Portuguese star to get injured this term, saying: “They have other players that can go in that position like Pogba or Donny van de Beek but they don’t have the same impact as him.

“It’s a player that United rely on heavily. I’m sure that if he wasn’t there it would have abs effect on United’s form.”