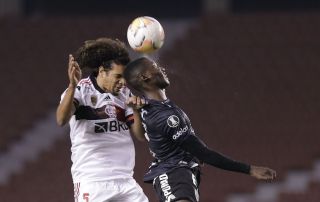 Stretty News understands — as published during the week — Manchester United have scouted the Independiente del Valle midfielder but the ‘transfer imminent’ hype has got far ahead of reality.

Caicedo, 19, has already made four appearances for the Ecuador National Team and plays a defensive role in the middle. Ole Gunnar Solskjaer needs to strengthen that area of his squad, with Nemanja Matic beyond his best before date.

The update from Romano sounds positive from a United perspective, although the Italian journalist claims Manchester United are in contact with his agents… There’s a big problem here, because Caicedo doesn’t have an agent…

Still the same situation about Moises Caicedo. Man United are in contact with his agents and ‘control’ the situation – the player would love to join #mufc and his contract won’t be a problem. Now it’s up to the club. It’s not a done deal (yet?). 🔴 #transfers https://t.co/js1lLvudtM

Apparently there are a number of people claiming to be the player’s agent in an attempt to get the deal done, but Caicedo hasn’t got one. This could potentially hold a deal up but our understanding is no more than the fact United have scouted the player.

Chelsea had reported interest during the week, as per the Daily Mail, but it’s difficult to know how a deal will be sorted without an agent in place.

Hopefully United liked what they saw on their scouting trips and he can help boost the side defensively from January onwards.