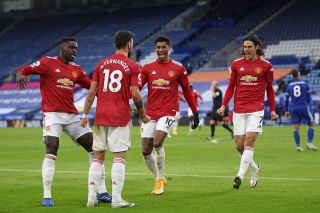 Talk about making an impact from the bench.

Edinson Cavani wasn’t long on the pitch before he created as assist to give Manchester United the lead.

A stunning pass found Bruno Fernandes inside the box as the Portuguese star made it 2-1 with over 10 minutes remaining on the clock.

Three points today would be a huge boost for United in our quest to stay on Liverpool’s heels over the Christmas, but sadly Leicester equalised shortly after – like they did following United’s first.

Fernandes took his goal very well against a top goalkeeper, who has already done well to ‘limit’ Marcus Rashford’s scoring in the Premier League.

Another game, another goal for Bruno Fernandes! 🔥

Edinson Cavani with a HUGE impact from the bench to create the assist! pic.twitter.com/6lwaGioMYn

This could be a glorious way to start Boxing Day!