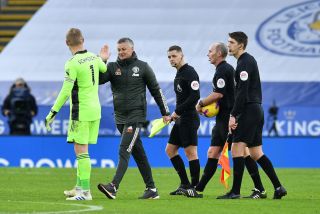 Ole Gunnar Solskjaer was left frustrated after Manchester United failed to capitalise on taking the lead twice against Leicester City.

United were held 2-2 at the King Power Stadium with a late Axel Tuanzebe own goal cancelling out Bruno Fernandes’ strike.

Marcus Rashford had earlier given United the lead midway through the first-half and Harvey Barnes netted a stunning equaliser before the break.

The draw represents a big missed opportunity for the Reds who created the more dangerous chances against Brendan Rodgers’ men.

United remain third in the Premier League, a point behind today’s opponents as they failed to close the gap on leaders Liverpool.

Solskjaer admitted at full-time this was far from a disastrous result against worthy opposition.

“One point is not the worst result, but we are disappointed we didn’t get away with three here because it’s a very good side we are playing against,” he told BT Sport.

Before netting a tidy opener, Rashford squandered a golden opportunity by somehow heading over from point-blank range after a sumptuous cross from Bruno Fernandes.

Solskjaer unsurprisingly preferred not to be critical of his forward for the miss as he was otherwise dangerous.

“Of course he knows his first chance is a big one,” he added.

It seems like he finished his header before the ball came and it hit the top of his head. Just one of those things.”

United are back in action on Tuesday as they look to get back to winning ways against Wolves at Old Trafford.