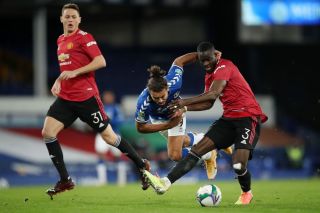 It sounds like Ole Gunnar Solskjaer is setting up with a back-three against Leicester City at the King Power Stadium.

Manchester United have a chance to stay on Liverpool’s heels at the top of the Premier League if they can win away to Leicester City, who have been one of the best sides in England this season.

Brendan Rodgers has done a really good job since moving to Leicester from Celtic and tactically he knows how to get the best out of his players, which is something all managers wish could be said about them.

Solskjaer appears to have changed United’s shape for this game, and he’s just confirmed that Eric Bailly will start at centre-back in the same defence as Victor Lindelof and Harry Maguire. I mean, we’re hardly going to play with a back five?

Bailly’s pace will be beneficial in our quest to keep Jamie Vardy quiet because both Lindelof and Maguire lack the pace required to do that on their own, which undoubtedly came into Solskjaer’s thinking prior to kick-off.

Solskjaer told MUTV, as per @ManUtd: “I can tell you now Eric is playing centre-back. He did really well against Everton so there’s no point putting him in a different position.”

💬 Ole: "I can tell you now Eric is playing centre-back. He did really well against Everton so there's no point putting him in a different position.

"He's been out for a while but you saw what he can do."

I’m happy to see Bailly in the line-up today, but still feel a bit of uncertainty about the outcome of the match not knowing how we are going to setup formation wise?