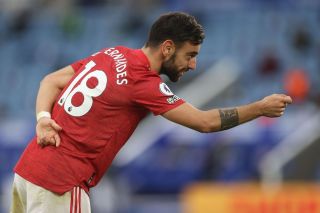 Leicester City 2-2 Manchester United – The Reds took the lead twice, only to be cancelled out by two quick-fire equalisers.

Feels like a loss but a draw away to Leicester City is hardly the worst point to gain on the road.

Brendan Rodgers and Ole Gunnar Solskjaer smiled warmly as they saluted each other after the full-time whistle.

It was an even game, open and entertaining all in equal measures. Remarkably, Leicester City became the first Premier League side to stop United taking three points from their home ground this season.

United had enough chances to win the game in the second half but Leicester kept plugging away and deserved their point.

Marcus Rashford scored United’s opener but could have bagged a hat-trick on the day, whereas Edinson Cavani made an instant impact from the bench to assist Bruno Fernandes for our second, to make it 2-1.

Then Leicester talisman Jamie Vardy made it 2-2 with his match-defining equaliser.

As things stand, Liverpool are three points clear of Leicester at the top of the table with a game in hand. Manchester United have played the same number of games as first-placed Liverpool and are now four points adrift.

The Scousers take on West Brom tomorrow and I can’t see an upset being on the cards.

One response to “Report: Manchester United draw away to Leicester City in balanced clash”