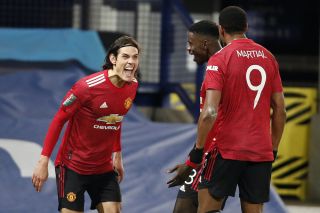 Manchester United will be looking to close the gap on Liverpool at the top of the Premier League table to just two points when they face Leicester City at the King Power stadium on Saturday afternoon.

The reds go into the game on the back of a terrific 2-0 victory over Everton in the League Cup quarter-finals whilst the hosts ran out 2-0 winners over Tottenham Hotspur in the Premier League last weekend.

Ole Gunnar Solskjaer is likely to most a host of changes to the team that faced Everton during the week with Anthony Martial, Marcus Rashford and David de Gea all expected to return to the starting eleven.

Leicester have enjoyed a fantastic start to the campaign and currently sit second in the Premier League table under head coach Brendan Rogers but despite the Foxes impressive form this is still a game I put United as slight favourites going in to.

United’s away form has been great this season and if the reds can turn up and play to their potential like we have seen them do in games gone by against Paris Saint-Germain, Everton, Newcastle and the likes then United should leave the King Power Stadium with all three points.

For how well Leicester may be going forward they still remain vulnerable at the back and its that defence which Solskjaer will no doubt look to exploit on Saturday.

With games coming thick and fast over the festive period its essential United beat Leicester to keep their winning momentum going. Too many times this season we have seen United put a string of victories together only for that momentum to come grinding to a halt and its that inconsistency which needs fixing in the second half of the campaign should Solskjaer wish to make this season a successful one.