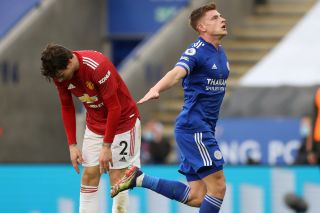 Victor Lindelof has been playing through the pain barrier at Manchester United but has been forced off with an injury problem against Leicester City.

The Swedish international was selected in a less familiar right-back role for the injured Aaron Wan-Bissaka at the King Power Stadium and has looked unconvincing and uncomfortable throughout.

He made little impact going forward and struggled to deal with the threat of goalscorer Harvey Barnes.

And on 66 minutes, Ole Gunnar Solskjaer was forced to make his second change of the afternoon, bringing Axel Tuanzebe on for the defender who was showing clear signs of discomfort.

Many supporters suggested Tuanzebe should have started ahead of Lindelof regardless, but the academy graduate has the chance to make his mark in the final 20 minutes after an impressive showing against Everton in midweek.

Earlier, Paul Pogba was brought on for Daniel James as United chase a winner in the key Premier League fixture.

Stretty News will keep you up to date with latest concerning the severity of Lindelof’s injury in the midst of this defining congested period.