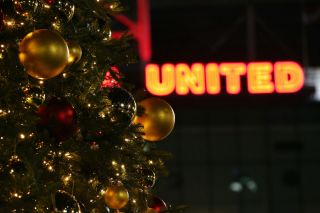 Merry Christmas to all of our wonderful readers!

Some pleasant reading for you this morning.

Manchester United’s record on Boxing Day is pretty decent – not that it should give us extra confidence on Saturday because it could go either way.

On top of that, United have the most wins (21) and highest win rate (81%) of any Premier League side when it comes to games on Boxing Day.

The fixture has added significance because even with a game in hand on the Foxes, United are just a point behind them in third. A win wouldn’t only see the Reds overtake Leicester but put more pressure on Liverpool at the top of the table.

Brendan Rodger’s Leicester are currently four points behind the Scousers, so they can’t move up a place this weekend.

On Saturday night, Everton — in fourth place and equal on points with United — travel away to Sheffield United. We’ll have our eyes on that game as well as Wolves v Tottenham and Arsenal v Chelsea.

What an incredible Boxing Day we have in store if it all goes United’s way!