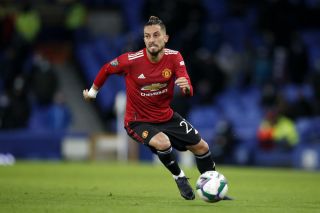 It was a substitution that left a number of Manchester United fans scratching their heads.

But Ole Gunnar Solskjaer was looking to ‘change the dynamics of the game’ when he introduced Luke Shaw during Manchester United’s win over Everton in the Carabao Cup quarter-finals.

United secured their place in the semi-finals and will play host to rivals Manchester City for a spot in the final.

Both of United’s goals came after left-back Shaw replaced Alex Telles in the 85th as we hunted a winner. Despite also having Fred and Jesse Lingard available on the bench, Solskjaer turned to Shaw.

“You never know what will happen in football, the first goal always changes games. As long as we were in the game I knew my substitutions could come on and make an impact,” Solskjaer told Sky Sports after the match (via Manchester Evening News). “Even Luke [Shaw] when he came on he has the strength and power to drive down the side so we tried to swap around a little bit the dynamics of the game.

“Very good start the first 20-25 minuets we were excellent and should’ve been two or three goals up. They made a few good saves and then had a good spell just before half-time but the last 20 minutes or so we played well.

“It was cagey at times — there and back and flowing, attacking and defending but you’re always confident if it opens up a bit with the pace we have.

“[Edinson] Cavani should’ve scored three in the first half but he is a top striker, movement, quality and the goal was excellent.”

It’s a big boost for Solskjaer to be able to call on multiple defenders at left-back — and we haven’t even started talking about Brandon Williams yet. The academy graduate played a big role in the first team last season, but has recently been linked with a move to Bayer Leverkusen.

The German side are said to want a permanent move, as per Sky Sports, but United won’t entertain such a deal knowing the impact Williams could have at the club.