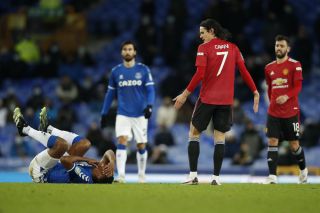 Manchester United manager Ole Gunnar Solskjaer insists there was nothing in the clash between the two players.

The Red Devils beat Everton 2-0 thanks to late goals from Cavani and Anthony Martial.

They will now face Man City at Old Trafford in the semi-finals, with Solskjaer looking to reach his first final as United boss after three last-four defeats last term.

Cavani scored the important opener after missing a number of chances in the first half.

The Everton centre-back dropped to the ground after a shove from Cavani.

However, with both players from South America, Solskjaer believes there was little in the incident.

Solskjaer said, as per the Daily Star: “Nothing in it, two South Americans that have had a few battles before.

“They met in Copa America qualifiers so no this was a proper game of football. With fans, tackles, yellow cards and chances at both ends. I enjoyed it.

“Cavani should’ve scored three in the first half but he is a top scorer, movement, quality and the goal was excellent.”

United can get revenge against City after crashing out of the competition last year.

It could go a long way towards landing Solskjaer his first trophy as United manager.

Solskjaer added: “A semi-final is sometimes worse than the final because it’s the worst possible time to lose a game and go out of the competition.

“We know that when we defend well we have players to win us the game, spirit in camp is good, winning gives energy and gives you a boost so we head into Boxing Day positive.”

Although United started brilliantly against Carlo Ancelotti’s side, we wasted a number of opportunities and took very long to open the scoring.