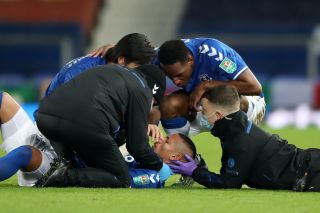 Richarlison looked worse for wear after being led off the pitch at Goodison Park after a nasty collision in Wednesday’s League Cup quarter-final against Manchester United.

The fiery Everton forward was looking to compete for a loose ball when Bruno Fernandes began to contest with the Brazilian.

But neither Richarlison or Fernandes saw Eric Bailly’s flying challenge, which half-sandwiched the Everton frontman. He required several minutes of treatment before being helped off the pitch.

United controlled the game throughout but losing Richarlison was always going to be a big blow for Carlo Ancelotti’s men.

Richarlison has five goals and three assists to his name in 13 appearances across all competitions this season.

He took to Twitter after the 2-0 defeat last night, saying: “To everyone who sent a message and worried, I’m fine. It was more the scare and the image that was ugly. Bailly apologised to me later and everything is fine. Something that happens in the game. Thank you for your affection and concern.”

Bailly went for the ball and I don’t think Fernandes saw his team-mate crashing in from a midair position.

It can only be considered positive news that Richarlison is alright and it shouldn’t be long before he returns for the Toffees.