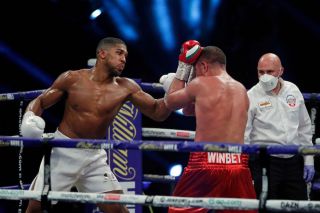 Anthony Joshua thinks Roy Keane could’ve made it in the ring rather than on the pitch.

“If I was to pick a footballer who could make a great boxer… Roy Keane,” he said during a video for DAZN, cited by the Daily Star.

“Manchester United need someone like him, to get in there and say it how it is, doesn’t take any nonsense.

“In boxing, that’s the type of person you need to have.”

While there will be no shortage of people wanting to throw a punch at our sacred Keano, I would advise anyone to think twice before accept a duel with the Irishman.

Keane took up boxing at the age of nine and trained for several years, winning all of his four bouts in the novice league. He was also developing as a footballer at this time when his potential was highlighted.

All 2021 needs is a Roy Keane v Conor McGregor PPV fight. NOT!