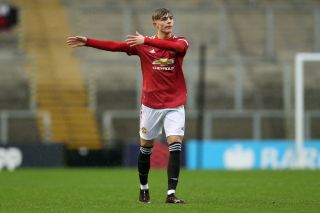 Brandon Williams will not be involved in Manchester United’s Carabao Cup quarter-final against Everton at Goodison Park due to illness.

Ole Gunnar Solskjaer has made nine changes to his side that thrashed Leeds in the Premier League, but Williams has been omitted from the squad entirely despite an expectation he would feature.

And according to reliable United insider Jonathan Shrager, Williams has been unwell and therefore did not train on Tuesday.

Shrager tweeted before kick-off:”Regarding Williams’s omission from tonight’s #MUFC squad, I am told that it is because Brandon has not been feeling well. He did not train yesterday”

The omission of Williams has afforded Axel Tuanzebe the chance to start at right-back this evening.

Meanwhile, Sky Sports reported on Tuesday that Williams has been subject of interest from Bundesliga side Bayer Leverkusen.

The report claims that Leverkusen are seeking a permanent deal for the 20-year-old academy graduate but United would only entertain a loan move.