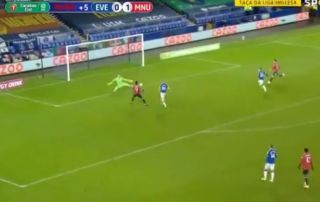 Manchester United booked their place in the Carabao Cup semi-finals with two late goals against Everton.

A bit of quality in the end sealed the win, but the Red Devils were far better than Everton in the first-half and should’ve been miles ahead at the break.

Ole Gunnar Solskjaer brought Anthony Martial and Marcus Rashford on to try score a goal when the scoreline was 0-0.

While Edinson Cavani got our first, Martial slotted the ball past Olsen at the end to confirm United’s place in the semi-final draw.

He ran in calmly on goal before slotting it past the keeper.

The draw takes place soon on Sky Sports Main Event. Sky subscribers can watch it via the Sky Go app.