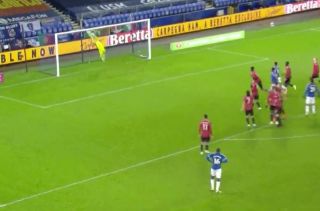 Dean Henderson’s best save of the match.

While Manchester United have been on top for the most part, Everton had a couple of chances to score in the first-half.

The young keeper is standing in for David de Gea for tonight’s Carabao Cup quarter-final against Everton. He hasn’t had much to do, but his save to prevent a Gylfi Sigurdsson free-kick hitting the back of the net.

It’s a save a keeper of Henderson’s standard should be saving – but Sigurdsson is one of the best set-piece takers in the Premier League and has been for years.

Everton have gathered around Henderson for corners so maybe they’ve noticed a weakness in his game.

Only time will tell but he did well to stop the free-kick!