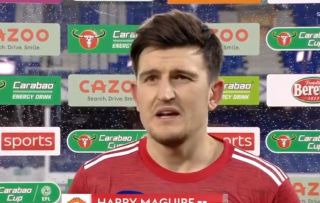 Harry Maguire was proud of Manchester United’s performance in the Carabao Cup quarter-final away to Everton.

The Red Devils dominated the first half, scored twice and managed to keep a clean sheet against Everton.

Carlo Ancelotti’s side have been one of the Premier League’s strongest outfits but United were by far the better side on the night.

Maguire and his team-mates now have a League Cup semi-final to look forward to.

Speaking to Sky Sports, as seen below, Maguire said: “It was an excellent performance. We play for Manchester United and expect to win trophies.”

🔴 "It was an excellent performance. We play for Manchester United and expect to win trophies."

Who will Harry Maguire's Man Utd get in the Carabao Cup semi-final draw?

The manager made 9 changes tonight but they jumped every hurdle.