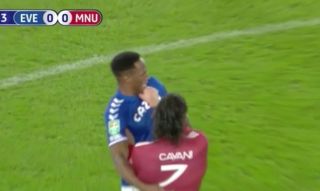 It was totally unnecessary and Edinson Cavani was lucky to get away with it.

The match kicked off at 8pm and it’s still goalless at Goodison Park.

But there was room for handbags shortly after the second half began when Cavani clashed with Mina.

Luckily, the referee didn’t see anything and there was no VAR intervention because the Uruguayan pretty much choke-slams the Everton centre-back.

The referee surely warned both players to stop bickering because Cavani escaped without a yellow card?

We don’t think it will be long before Ole Gunnar Solskjaer makes a change here and he could take off Cavani who has missed an array of chances already tonight.

2 responses to “Video: Cavani gets away with the closest thing to a choke-slam in football”