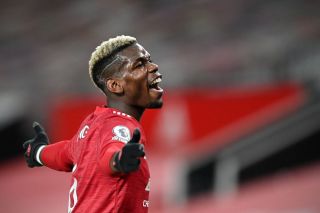 Ole Gunnar Solskjaer has exclusively told ESPN that the Manchester United squad can play a role in convincing Paul Pogba to stay at the club.

Pogba’s agent Mino Raiola has been outspoken about his client’s wishes to leave United, either next summer or when his contract expires in 2022.

The uncertainty around Pogba has always been there and fans have long been frustrated by it.

Especially when his agent thinks it’s alright to speak out about a star player wanting to leave, the day before United’s crucial Champions League clash with RB Leipzig, which saw them crash out of the tournament and into the Europa League.

Solskjaer described Pogba as “ambitious” but said the 27-year-old can win silverware with him at Old Trafford.

“There’s always a demand at Man United to win trophies and the more you win trophies, the more players are going to want to play for us and then there’s a higher standard you’ve got to set yourself,” Solskjaer told ESPN.

“It’s a demand for the players, it’s a challenge for the players that we want them to improve and get better and better. Paul has been here for a while and of course he wants to win more trophies.

“It’s down to us to win trophies and then let’s see who will be part of the team going forward.”

What I like here is how Solskjaer is not shying away from the need to win trophies.

If Pogba still wants to leave come the end of the season, I won’t really be bothered because I think it’s time to move him on and build the rest of the team around Bruno Fernandes.

The Frenchman is set to start against Everton in the Carabao Cup quarter-finals tonight and Solskjaer insists the World Cup winner has not been distracted by the ongoing speculation over his future.

“He’s got a very, very good attitude to the training and his football,” Solskjaer added.

“He loves football and he’s ambitious and wants to have success like most of the others — most of the others that are in the squad. We’re not all the same but I would say that this squad has impressed me with their attitude, spirit and the way they go about their work.”

Follow @StrettyNews on Twitter for more updates in the lead up to United’s trip to Goodison Park in the League Cup.