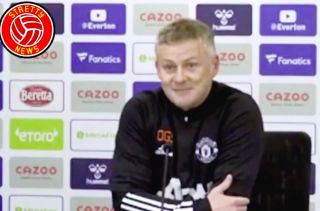 Ole Gunnar Solskjaer had one eye on the Carabao Cup semi-final draw that took place during his post-match press conference at Goodison Park.

United sealed their progression to their fourth semi-final in Solskjaer’s reign with a nervy 2-0 victory over Everton on Merseyside.

Edinson Cavani’s late stunner was the difference and substitute Anthony Martial put the game beyond doubt in the final seconds.

Solskjaer was watching the draw carried out by Laura Woods and Darren Bent on Sky Sports while carrying out media duties and gave a wry smile when he learned United’s fate, describing it as a ‘big game!’.

The tie will be played over one-leg and is likely to take place on the week of 4th January 2021.

We hope for a far more exciting encounter than the dull affair in the same fixture earlier this month.