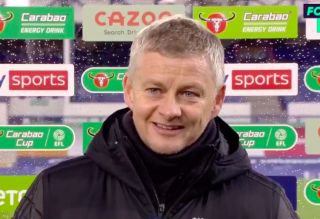 Ole Gunnar Solskjaer admitted Edinson Cavani ‘should have scored three’ in Manchester United’s Carabao Cup victory over Everton but emphasised his admiration for the match-winner.

Cavani smashed in a glorious left-footed winner two minutes from time to seal United’s progression to the semi-finals.

Anthony Martial netted late on to put the game beyond doubt, but the moment of inspiration from Cavani was a difference maker in a tight affair.

United were superb in the first-half, creating a host of chances and Cavani failed to capitalise on the dominance on multiple occasions.

But he produced the moment of quality when it mattered most to set up a mouthwatering semi-final clash against Manchester City at Old Trafford.

Solskjaer praised his striker’s movement and quality for the goal, and was quick to dismiss suggestions he could have been sent off earlier in the game after an altercation with Everton centre-back Yerry Mina.

Listen to Solskjaer react to Cavani post-match below, via Sky Sports: