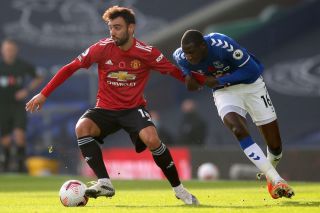 After a brief slump, Carlo Ancelotti’s men are flying after victories over Leicester, Chelsea and Arsenal and confidence is high on Merseyside.

Everton will be looking to avenge their 3-1 defeat at home to the Reds last month and are likely to field a strong side roared on by 2000 home fans in their bid to reach the semi-finals for the first time since 2016.

Meanwhile, this competition represents a superb opportunity for Ole Gunnar Solskjaer to claim his first silverware as United manager.

But we still expect rotation to Solskjaer’s starting lineup ahead of the huge Boxing Day game away to Leicester City.

Stretty News caught up with the Liverpool Echo’s Everton writer Adam Jones, who gave us his views on tonight’s game.

Everton are fourth in the Premier League table, level on points with United at Christmas. How do you sum up Carlo Ancelotti’s first year in charge on Merseyside?

“In true Everton fashion, it’s had its ups and downs.

“From the relatively early low of falling out of the FA Cup to Liverpool last season, Carlo Ancelotti has continued to build a side with a real backbone at Goodison Park.

“The early sings of that were present in 2019/20 with some rare wins on the road for the club, which have now in fact become the norm.

“The overhaul continued until the summer with some very smart signings in the positions Everton needed most, meaning it was hardly surprising for many Blues to see such a strong start.

“A little blip in October/November aside, this has been a very good beginning to the season for Everton, who now face what is unquestionably their biggest game so far against this Manchester United side.”

Has the past week proven Everton have what it takes to be serious challengers for the top four?

“The top four would be very ambitious, but the last week has shown that the potential is there.

“Ancelotti took some time finding a system that would benefit his side with key players like Lucas Digne, Seamus Coleman and James Rodriguez out – and has stumbled upon the 4-2-3-1 currently being used.

“It’s not a long-term solution though, and it will be intriguing to see how things alter when all of those big names are back in the side.

“Going on this form it is possible for Everton to mount a top four challenge, but it could very well depend on how fit they keep their best players.

“The absence of Richarlison earlier this season coincided with the side’s poor run of form, for example. Have they got enough strength in depth to cope with certain players spending time on the sidelines?

“A European push generally is a must for Everton this season, however, alongside that desperate desire for a trophy.”

How much importance is Ancelotti likely to place on the Carabao Cup given Everton’s league form? Do you expect significant changes?

“As I previously mentioned, this is Everton’s biggest game of the season.

“The club have been starved of success for far too long, and that’s essentially why Carlo Ancelotti was brought to Goodison Park.

“The manager will absolutely know the significance of finally breaking that trophy duck and will likely put a very strong side out on Wednesday.

“Perhaps there might be rotation in goal, but other than that I would expect a full-strength Everton for this match.”

What have you made of James Rodriguez in an Everton shirt? Will he be the biggest threat for United if fit to play on Wednesday night?

“He’s been fantastic since joining Everton, and will be a real miss on Wednesday.

“He brings something truly unique to the side – a star quality, both on and off the pitch, which emanates through almost everything he does.

“He might not have been in the best form following picking up a slight knock against Liverpool, but he was still crucial to Everton’s creativity when he was in the side. And, he did a lot more defensively than those who don’t watch him every week might give credit for.

“Everton have found a way to play without him right now, but he’s going to be crucial for the rest of the season.”

How pleasing has it been to see fans back at Goodison Park and how much do you think it affects the occasion?

“Being at that Chelsea win felt like a phenomenal breath of fresh air.

“Having been fortunate enough to attend an essentially empty Goodison Park since June, you almost forgot what the noise of supporters felt like.

“It might have only been 2,000 at Goodison for that match, but it felt like at least ten times as much.

“Frank Lampard knew that it would affect the performance of his side’s opponents and it absolutely did.

“Everton had the extra energy, motivation and desire to produce a great result. They did the same against an admittedly struggling Arsenal last weekend.

“This will be different than United’s last visit to Goodison. Under the lights of this famous stadium, the supporters will give everything to get behind their side. Ole Gunnar Solskjaer should be wary of that.”