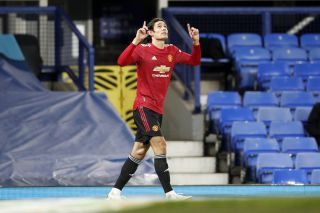 The 2020/21 Carabao Cup is reaching the business end with the final not far away.

Manchester United have eliminated Everton to make tonight’s draw for the semi-finals which takes place soon (follow @StrettyNews for updates).

Tottenham also made the semi-finals tonight after a 1-0 win over Stoke City, while Ole Gunnar Solskjaer’s United overcame a difficult meeting at Goodison Park.

Manchester United had a real battle on their hands and it took late goals from Edinson Cavani and Martial to win the game. We were by far the better side in the first-half, but failed to build on that in the second half despite nicking two goals near the end.

Another big win on the road for the Reds!

Sky subscribers can also stream it live on the SkyGo app.

The semi-finals are expected to be played on the week of 4 January 2021.

Whoever comes out on top of those ties will have to wait until April 25 to play the eagerly awaited final.