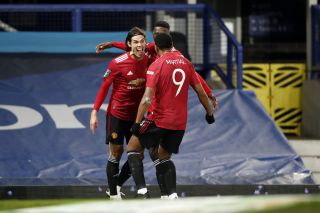 Manchester United have been drawn against Manchester City at Old Trafford in the semi-finals of the Carabao Cup.

Ole Gunnar Solskjaer’s men will hope to perform better than the dull 0-0 draw in the same fixture earlier this month.

City progressed to the semi’s by hammering Arsenal at the Emirates and will be desperate to continue their outstanding record in the competition by making another final at Wembley.

Meanwhile, Jose Mourinho’s Tottenham were handed the more favourable draw. They will face Championship outfit Brentford at home in the last four.

Edinson Cavani smashed United into a lead two minutes from time with a glorious left-footed strike and substitute Anthony Martial put the game beyond doubt with a composed finish in the final seconds.

This year, the semi-finals will be played in one-leg shootouts rather than the usual two-leg affairs.

The semi-finals are expected to be played on the week of 4 January 2021.