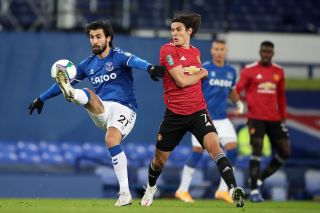 Coming into the game both teams were in great form domestically and would have been confident they could make the semi-finals.

It was to be the Reds who progressed in the Carabao Cup though after an Edinson Cavani opener and an Anthony Martial late double sealed the Toffees’ fate.

In light of Wednesday’s important 0-2 cup win, we have rated every United player who featured.

Recalled to the starting line-up in place of David De Gea.

Made a brilliant save just before half-time, otherwise a very quiet evening for the Englishman.

Brought in, in place of an injured Aaron Wan-Bissaka, looked decent on the flank.

Defended well and got forward often throughout.

Had a decent game at the heart of United’s defence. Strong and quick throughout.

As physical as ever, United’s skipper had a decent game overall, despite rarely coming under pressure.

Really good game from the Brazilian. Looked solid in defence, much improved on previous games.

Unlucky to have been subbed off with six-minutes to go for Luke Shaw.

Matic’s stability at the heart of United’s midfield gave his team-mates the platform to start the game on the front-foot.

Despite his side’s brilliant start, the Serbian midfielder’s influence became less and less as the game went on.

A run of games wouldn’t go a’miss for the 23-year-old.

Subbed off in the 67th-minute for Anthony Martial.

Barely had an impact, positioned too deep.

Tried too hard all evening, similarly to van de Beek, it just wouldn’t click for Fernandes.

Very lively on the right-hand side, unlucky not to score in the first-half, denied by the post, but ultimately failed to stamp his authority on the game.

Subbed off in place of Marcus Rashford at the 67th-minute mark.

Tenacious and feisty. United’s star-striker will be thanking his lucky stars that the Carabao Cup doesn’t use VAR. The 33-year-old would have undoubtedly seen red after a choke-slam style altercation with Everton’s Yerry Mina.

Came up with the goods when they really mattered though.

The South American fired United into the cup’s semi-finals with just a couple of minutes on the clock.

Came on with just under half-hour to go in place of Greenwood.

Subbed on for Donny van de Beek after 67-minutes.

Fluffed his lines by kicking his own leg when presented with a glaring oppotuntity during the 86th-minute but did make up for it minutes later after setting team-mate Cavani up.

United’s number-nine went on to bag himself one with the last kick of the game too. Decent half-hour all round.

Controversially subbed on for Telles during the 84th-minute when United were six-minutes from penalties.