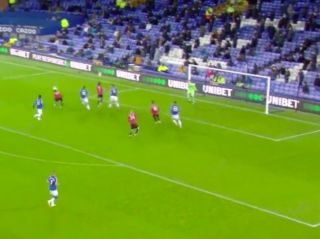 Manchester United have done everything but score in the first half-hour of their Carabao Cup quarter-final against Everton at Goodison Park.

Carlo Ancelotti’s side have been slow out of the blocks and United have continued where they left off against Leeds with an intense start.

The Reds have created countless chances in the opening exchanges, but went closest through Mason Greenwood after 24 minutes.

Ole Gunnar Solskjaer’s men have played some fine football and Greenwood’s chance came after a glorious interchange with Alex Telles.

The Brazilian left-back found the youngster with a cross and his glancing header drifted agonisingly wide, clipping the post.

See the chance below. Footage courtesy of Sky Sports: