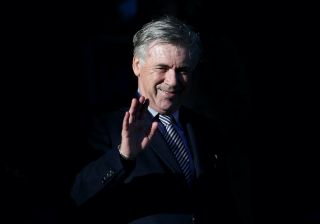 It would have made perfect sense to at least to have considered the Italian back in 2013 following Sir Alex Ferguson’s retirement.

Everton manager Carlo Ancelotti has revealed how he rejected Sir Alex Ferguson’s approach to succeed him at Manchester United.

The Toffees are looking for the first trophy since 1975 and a place in the semi-finals of the Carabao Cup is up for grabs tonight, with Manchester United travelling to Goodison Park for the quarter-finals.

Ancelotti has detailed how he politely declined the Scot’s offer to succeed him at Old Trafford, with the Bernabeu his next destination after leaving Paris Saint-Germain.

“You want to know from me?!” Ancelotti responded when quizzed on an offer to work with United, as per The Independent. “I can say that I still keep a fantastic relationship with Sir Alex, and we met when he decided to stop (retire).

“But I was close to Real Madrid, and so I appreciate the fact that at that time he talked to me. And that’s it, no other opportunity (to manage United).”

How does one go from Ancelotti to David Moyes? That’s who United eventually hired as Fergie’s replacement.

It was a disastrous appointment and Moyes didn’t last the entire season because United had ruled themselves out of Champions League qualification for the following campaign. Ryan Giggs stood in to manage a few games towards the end of the season before Louis van Gaal was made manager.

Ancelotti has done a good job at Everton in a league we won with Chelsea in 2010. He will be going all out to cause an upset tonight.

“Yes of course Manchester United is a fantastic club, a fantastic team I battled against them a lot of times when Sir Alex was there, when I was at Chelsea,” Ancelotti added.