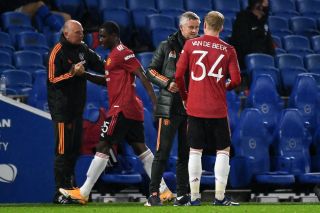 Carlo Ancelotti’s side beat Arsenal 2-1 on Saturday, before Ole Gunnar Solskjaer’s men put Leeds to the sword a day later. It shapes up for a good tussle in the League Cup with a place in the semi-finals up for grabs.

Manchester United are third in the league while the Toffees sit in fourth. You’d have to say both teams are in decent form, but with United being inconsistent for the best part of a decade it’s a difficult encounter to predict.

What both managers have in common is they are expected to improve on their league form from last season — to finish higher than twelfth for Everton, and to engage in a title race for United. On top of that both sets of fans are craving a trophy.

Checking the League Cup betting markets would be advisable but Manchester City are set to be favourites after knocking Arsenal out of the quarter-finals last night. But it’s worth checking out more details on that because a win tonight and United will be going for the trophy.

A lot of people put their noses up at the Carabao Cup but it could be useful to Solskjaer this season. I would like to see United go all the way this season and add to our trophy cabinet. Once fans get back into the ground they will rally behind the team, which I feel has been lacking since the new season began.

It has been four years since United won the League Cup and Everton have never won it at all, with just two appearances in the their history competed to nine for United. Let’s make it a tenth this season and a success one on top of that.

Everton have scored 12 times en route to the last eight. They opened up with a 3-0 win over lower league Salford City before hammering Fleetwood 5-2 on the road. An impressive 4-1 win over West Ham booked their place in the quarter-finals back in September.

As for United, who entered the competition one round later than Everton, we’ve beaten Luton Town and Brighton by 3-0 scorelines.

Given the importance of upcoming games in the Premier League, it will be interesting to see if both managers name full strength sides ahead of kick off.

However, with Greater Manchester and Manchester set to remain in Tier 3, Liverpool is still in Tier 2 meaning Everton fans can attend tonight’s game at Goodison Park in limited capacity. That will be a big boost to the Blues, but hopefully Solskjaer can motivate the players into a quick start because scoring the first goal could open the game up for us on the night.