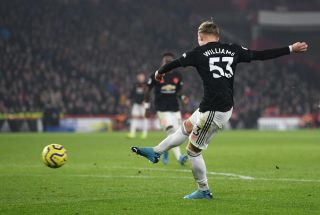 Bayer Leverkusen have made contact with Manchester United over a deal for full-back Brandon Williams, according to Sky Sports.

The report claims Leverkusen are searching for a replacement for Santiago Arias, who joined on loan from Atletico Madrid but has suffered a broken leg and ankle ligament damage while on international duty with Colombia. He was only able to make one Bundesliga appearance before the injury.

Now it has emerged that Leverkusen want Williams on a permanent basis but it is understood that United will only entertain a loan move, as per Sky Sports.

Williams isn’t your ordinary full-back. He’s comfortable on both sides and brings versatility to the squad, so there’s no way I would sell the young Englishman.

Manchester United recently signed Alex Telles from FC Porto and the Brazilian looks like an improvement on Luke Shaw in the final third, though he lacks defensively and the latter has looked very good in recent weeks.

It’s good to see competition in the squad but I would like to see Williams go out on loan and come back a better player – ready to push for a place on either flank.

He was a regular in the first team last season, making a whopping 36 appearances under Ole Gunnar Solskjaer across all competitions, but has been limited to just 5 appearances this term.

Williams knows his break will come but he needs to remain patient.

A loan move would do him the world of good.