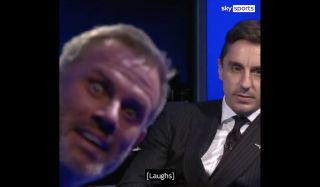 Sky Sports’ punditry duo Jamie Carragher and Gary Neville are rarely out of the spotlight and that doesn’t look set to change after the pair were tasked with making their 2021 selections.

The pair were asked to decide who their 2021 Premier League winners, top four, relegation and ‘player to watch’  were during Sky Sports’ Monday Night Football show.

After Neville’s selections were revealed, it became apparent the former United defender had selected current Red Devils midfielder Paul Pogba as his ‘one to watch’ next year.

Clearly unable to control his amusement, Carragher burst out laughing.

Can Pogba go on to prove Carragher wrong or does the former Liverpool defender have a point?