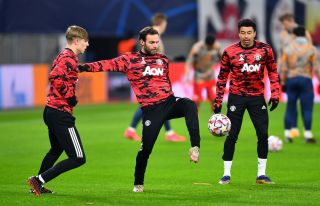 Manchester United manager Ole Gunnar Solskjaer has hinted that midfielder Jesse Lingard could be in line to feature against Everton when the two sides meet in the Carabao Cup’s quarter-finals on Wednesday.

Lingard, 28, has not featured for United since the end of September amid increasing speculation the midfielder could be set for an Old Trafford exit.

Despite the club’s hierarchy retaining the option to extend Lingard’s contract which is set to expire next summer, they have not yet chosen to activate the one-year extension.

A report last week from MEN claimed Lingard had emerged as a January transfer target for Chris Wilder’s struggling Blades.

However, speaking ahead of his side’s important Carabao Cup quarter-final match against Everton on Wednesday, Solskjaer has addressed Lingard’s absence.

When asked if fans can expect to see Lingard in action on Wednesday, Solskjaer, as quoted by MEN, said:“Jesse [Lingard] will be in the squad, yeah.

“He’s been working hard in training. He’s been unfortunate with having to isolate a few times, been in contact, or close contact with Covid, not even having it himself.

“He’s been very unlucky being away from the training ground a few times. He works really hard and he’ll be involved in the squad, definitely, on Wednesday.”

United will come into Wednesday night’s exciting cup tie off the back of a stunning 6-2 victory over bitter rivals Leeds United last weekend.

Despite the Reds being in great form, it would be fair to expect Solskjaer to ring the changes before arguably his side’s most important match of the season, so far, kicks-off on Boxing Day against Leicester City.

A win over Leicester City on Boxing Day could see the Red Devils climb to second in the Premier League table, but nevertheless, an important quarter-final tie against Carlo Ancelotti’s Everton is up first.