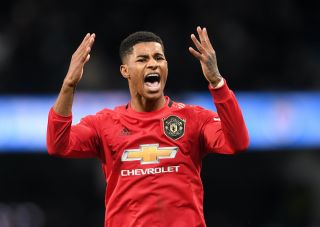 The United faithful will absolutely love that attacker Marcus Rashford has admitted he sometimes gets ‘too’ fired up when facing arch-rivals Man City and Liverpool.

Rashford, 23, has spent his entire career with United after joining their youth academy all the way back in 2005.

After making an impression for the club’s youth teams it didn’t take the talented attacker long to be called up to the senior first-team.

Rashford netted twice on his senior debut after being awarded a place in Louis van Gaal’s team to face Midtjylland in the Europa League at the beginning of 2016.

Since the English attacker’s debut nearly five-years ago, Rashford has featured in 235 senior matches and has been directly involved in an impressive 125 goals, in all competitions.

In recent times, United’s 23-year-old has become known not just for his on-field heroics, but also for his efforts to combat social issues such as child poverty.

In light of Rashford’s off-field efforts, he was recently awarded with a special BBC Sports Personality award.

However, in a recent interview with ManUtd.com, it may surprise some fans to hear the 23-year-old admit that he has to try hard to control his anger when facing off against some of his side’s fiercest opponents.

“I have the same feeling but I have to find a way to control it,” Rashford admitted. “Otherwise I’d just get loads of red cards! It gets too emotional sometimes.

“At the beginning of my career, the coaches will tell you there was times against Liverpool and City where they’ve had to take me off the pitch, they’ve had to substitute me because I used to let my emotions get the better of me and do things that weren’t in my character.

“I have to find a way to control it, but coming to the first team at such a young age and seeing how professional the players were, they showed me you have to put things aside and go on the pitch and be professional.

“That’s what I do now. I do things that make me relaxed, to settle myself down. Then I feel like I’m ready to play the game.”