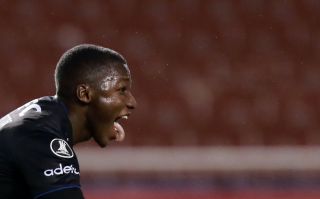 Manchester United are reportedly preparing to meet with Ecuadorian side Independiente del Valle to discuss the possible transfer of gifted midfielder Moisés Caicedo.

Caicedo, 19, joined Independiente’s youth academy last year and has since gone on to feature in 31 matches in all competitions.

Most impressively though, the gifted teenager has recently enjoyed a remarkable international breakthrough after featuring in four of Ecuador’s World Cup qualifiers.

It was reported earlier this week by MEN that Premier League giants United have identified the talented midfielder as a transfer target as the Red Devils continue to reinvent their recruitment policies.

However, the latest in this rapidly developing story comes from South American reporter Marco Lopez Castillo (via Sports Witness) who has claimed that United appear to be leading the charge for Caicedo.

It has been reported that RB Leipzig, AC Milan, Ajax, Alaves and West Ham United are also interested in Independiente’s commanding midfielder but it is the United hierarchy who already have a meeting set-up.

@acmilan and @rbleipzig would also be interested in Moi Caicedo. They join @Alaves, @WestHam and @AFCAjax as interested clubs. However, the only club that is going to have a meeting La Joya´s environment is @ManUtd

It has been suggested that Caicedo could move away from South America for a relatively cheap fee but the youngster’s work permit could be the toughest obstacle to overcome.