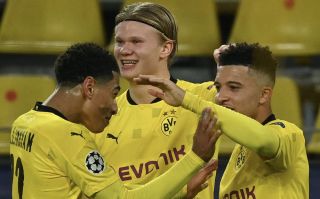 Haaland, 20, opted to join Borussia Dortmund in January and after his monumental rise in form could be set for a second move in as many seasons.

The 2020 Golden Boy has so far featured in 32 matches in all competitions for Dortmund and has been directly involved in a whopping 39 goals.

However, fans of the Black and Yellows will be far from pleased after Bayern Munich legend Matthaus believes the 20-year-old striking sensation is preparing to depart, despite being in Dortmund for less than 12-months.

Speaking to the Bundesliga’s official website, as quoted by the Mirror, Matthaus said: “Erling Haaland is a win not just for Dortmund but for the entire Bundesliga.

“At the age of 20, he is a machine. He is a flying striker. He brings a positive energy in the team while also scoring goals. He is irreplaceable.

“Erling Haaland is regarded at Dortmund like Robert Lewandowski is at Bayern: the player up front who is not only responsible for the goals but in charge of dragging the team with him. He is a leader at the age of 20.

“That says a lot and on top of that, he knows what he needs to do. He works defensively as well, something I really enjoy seeing Robert Lewandowski do as well. He is not one to just stay forward. His mannerisms as well, for a 20-year-old, to not only think of himself but of his team.

“This positivity that he radiates, radiates on the team which is why I think that someday, Haaland will not be playing at Dortmund anymore and will make the next step.

“He is already ready and we are proud to have him in the Bundesliga.

“Dortmund need to be pleased to have gotten him because he is a striker that fits to a club with such emotions.”

Matthaus’ exciting claims are set to send the likes of United and arch-rivals Manchester City into a frenzy after it was reported by the Daily Mail last week that both sides want to land the 20-year-0ld.

United may have the upper hand in the race to sign Haaland after current manager Ole Gunnar Solskjaer has previous experience of working with the Dortmund striker after the pair spent time at Molde together.

Read more: Anthony Martial’s stats that prove he was vital for Man Utd against Leeds