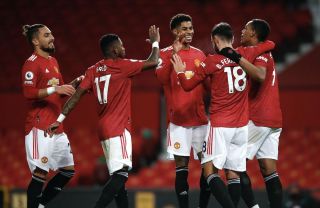 United enjoyed a thoroughly impressive performance against bitter rivals Leeds United when the two sides clashed at Old Trafford in the Premier League on Sunday.

United now sit third in the league table with a game in-hand, five-points off leaders Liverpool and one-point off Leicester City, who are next up for the Reds over the festive period.

The Red Devils will travel to the King Power Stadium on Boxing Day where they will play arguably their most important domestic match of the season, so far.

Both United and Leicester City currently boast some of the league’s best form after winning seven of their last 10 league matches, combined.

Weighing-in on United’s title chances, praise has come from an unlikely source.

Richards, who turned out for Man City in over 240 matches in all competitions believes the red half of Manchester could have a real chance of lifting this season’s illustrious Premier League if they can see off the Foxes.

Writing in his BBC Sport column, here is what Richards had to say: “I’ve heard people say all season that Manchester United are miles away from being a title-winning side but the league table tells a different story at the moment.

“If United win their game in hand, they are in second place and only two points behind what is a brilliant Liverpool team.

“They are in the race, for sure, even if some of Ole Gunnar Solskjaer’s critics won’t want to admit it. He deserves a lot of credit for the run they are on, but he probably won’t get it.

“I do kind of understand why – as pundits, we go week to week sometimes just looking in detail at one particular game or performance by a team, good or bad, and you can miss the bigger picture, or the direction they are heading in.

“You forget that, when you get a bit of momentum as a club, the outside noise doesn’t matter.

“United haven’t come from nowhere. A couple of poor results in the Champions League meant they are out of that competition and that led to more criticism of Solskjaer, but in the Premier League they have been building momentum for a while now and they have climbed to third on the back of six wins and a draw in their past seven games.

“They have been playing well too, and scoring lots of goals, but no-one really seems to consider Ole’s part in that, or those good results.

“It’s put down to his players rescuing games for him, and it’s only Solskjaer’s fault when things go wrong and he gets the blame for being “poor” tactically.

“I don’t think that’s fair, or reflects what has actually been happening. Solskjaer has got things absolutely spot on in plenty of big games in his time as United boss, including on Sunday against a Leeds team that have frightened a lot of opponents so far this season.

“On the plus side, Manchester United are certainly exciting to watch and they are also a young team that might just be maturing and coming into their prime.

“We might get a better idea of where they are at when they face Leicester on 26 December. That is a far bigger test of their title credentials than Leeds were.

“Leicester are seen as a counter-attacking side, which is how they beat Manchester City at the start of the season, but in their win over Tottenham they were excellent in possession and dominated the game.

“The Foxes can hurt you in lots of ways but they are most dangerous when Jamie Vardy gets behind your defence.

“He is bound to cause problems and United will have to deal with his pace and quality in front of goal before they get too carried away with the thought of mounting a title challenge, even if it is long overdue.”