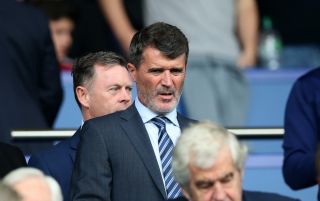 Now plying his trade as one of TV’s most outspoken footballing pundits, Keane is known for being someone who never minces his words.

Often making headlines for his savage assessments of players, it is rare to hear the former midfielder issue some praise, but that’s exactly what he did after Sunday’s round of league fixtures.

Keane watched on as his old club side tore bitter rivals Leeds United apart in an exciting match-up which eventually ended 6-2 to the Red Devils.

The game saw out-of-favour winger James named in the Reds’ starting line-up for just his fourth appearance in this season’s Premier League.

The 23-year-old Welshman’s inclusion did not go unnoticed after he put in a fine performance which he capped off with a goal late-on in the match’s second-half.

“He started off his career at United really well, but had a difficult few months.

“Again, credit to Ole [Gunnar Solskjaer] – he probably thought it was going to be his kind of game and it’s going to be open.

“Going to United was a big move for him.

“Look at his face, it meant a lot to the kid and I’m delighted for him. Playing for Man United is not as easy as everyone thinks, there’s a lot of pressure.”