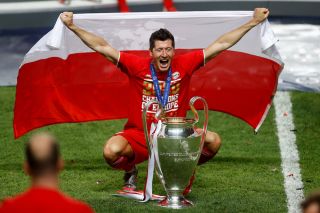 If there is one complaint to be had about Manchester United in the final third, it has been the lack of a natural centre forward.

Ole Gunnar Solskjaer’s deadline day capture of Edinson Cavani could be the answer to a successful season for the Red Devils, but he’s been fighting a niggling injury and has yet to have a proper run in the side.

When he gets a longer run in the team we expect more goals.

Mason Greenwood, Marcus Rashford and Anthony Martial have all impressed under Solskjaer but none of them yet look like a cultured No.9.

The youngest of the lot, Greenwood, may come more centrally in the years because he is the best finisher out of the three.

However, in terms of centre forwards, no-one is better than Robert Lewandowski right now. The Bayern Munich striker was named as the world’s best player at the FIFA Best Awards ceremony, tipping both Cristiano Ronaldo and Lionel Messi to the prestigious award, as per BBC Sport.

The Poland international joined the European champions in 2014, but two years prior to that he held a conversation with Sir Alex Ferguson about joining Manchester United.

Speaking to France Football, Lewandowski claims he was ‘ready’ to sign for the Reds: “After my second year in Dortmund, I had a conversation with Sir Alex Ferguson.

“He wanted me to come to Manchester. There I was very interested. I can even say I was ready.

“But Dortmund didn’t want to let me go. It didn’t bother me more than that because things were going well with Borussia.”

Fergie ended up signing Robin van Persie that summer, for the season after we conceded the title to Man City through goal difference.

It’s clear what the former United manager set out to do that summer.