Ole Gunnar Solskjaer has the luxury of making a host of changes without diminishing the quality of his Manchester United lineup to face Everton in the Carabao Cup at Goodison Park.

United’s 6-2 victory over ceaseless Leeds was an enthralling high-octane, high intensity encounter, and Solskjaer admitted at full-time that his players had earned a lie in.

But rotation at this stage of the hectic fixture schedule is vital and Solskjaer should utilise his full squad with one eye on the second versus third Boxing Day clash away to Leicester City.

After a brief slump in form, Everton are fourth in the Premier League after a perfect week including wins over Leicester, Chelsea and Arsenal.

Under Carlo Ancelotti, Everton are serious contenders for the European places this season, but the Italian is still expected to name a strong side in the Carabao Cup.

United, meanwhile, are yet to win silverware under Solskjaer and this competition represents a great chance of the Norwegian winning his first trophy as a manager.

The Reds won 3-1 at Goodison last month and should have strong belief they can secure a similar result with their familiar 4-2-3-1 setup despise the resurgence on Merseyside.

Dean Henderson has played in the previous rounds of the competition and is likely to assume his place in goal.

Alex Telles came on in the 60th minute against Leeds and should start on Wednesday with Luke Shaw needing rest before the key Leicester fixture.

Eric Bailly was an unused substitute on Sunday and could partner Harry Maguire in central defence as Victor Lindelof has been playing through the pain-barrier in recent weeks.

Scott McTominay was outstanding against Leeds but was forced off with a groin injury late on and should not be risked.

The midfield axis of Paul Pogba and Nemanja Matic was effective against Sheffield United and that partnership could return.

Alternatively, Solskjaer may retain Fred in the starting lineup for some mobility and intensity in the middle.

Indispensable Bruno Fernandes is rarely benched and it wouldn’t be surprising to see the totemic Portuguese playmaker retain his place.

But Donny van de Beek continues to be under utilised and the Dutchman should be entrusted in the attacking midfield role.

Daniel James took his chance against the club he so nearly signed for and deserves the chance to shine again from his preferred position on the left-hand side. 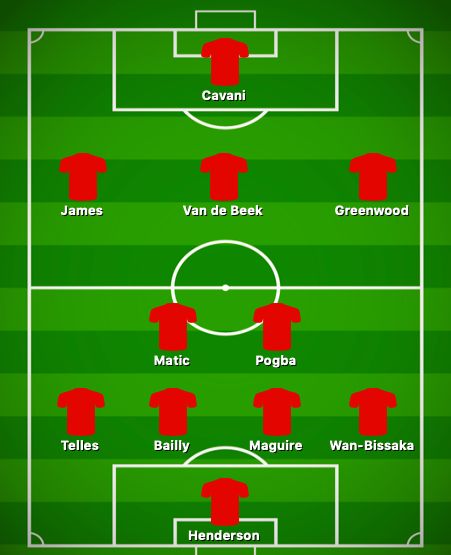 READ MORE: Anthony Martial’s stats that prove he was effective for Man Utd against Leeds