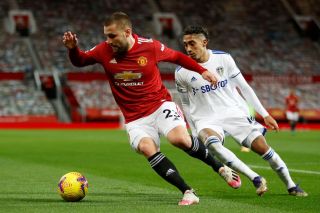 Former Manchester United midfielder Luke Chadwick had high praise for Luke Shaw after the left back’s solid display in the 6-2 win over Leeds United on Sunday.

Chadwick, who graduated from United’s academy at the turn of the century, has always been an admirer of Shaw.

Last season I would say the England international worked his way back into Gareth Southgate’s plans by performing consistently for United, but it now looks like the arrival of Alex Telles has helped him raise his game more.

Perhaps some extra competition — along with Brandon Williams — has brought Shaw to the next level as a player.

Chadwick claims that Shaw’s recent ‘level of performance’ leaves ‘not many’ left-backs better than him on current form.

“Again Luke Shaw’s level of performance has been great since Telles came into the building and competition for the left back position will raise both of the players’ game to get into the team and stay there,” he told CaughtOffside.

“Shaw seems to be the first choice at the moment but knowing Telles is waiting in the wings will keep him on his toes and hopefully keep the consistency he is showing.

“On form it’s hard to think of many better left backs then Luke Shaw, he has all the qualities and ability to get himself in the England squad and really challenge for that position.

“Injury problems have held him back the last couple of seasons but hopefully that is behind him now and he can really kick on and be the player he is more than capable of becoming.”

With Shaw beginning to show consistency last season, it looks like he will do the same term granted he avoids any injuries or niggles, I’m sure he will be contention to make the England squad for next summer’s Euros.

Let’s hope Shaw can continue performing at left-back throughout the Christmas period and for the remainder of the campaign.