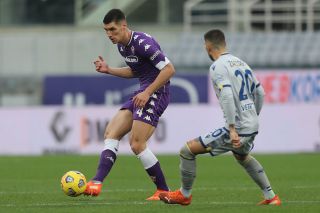 Manchester United are reportedly in the race to sign Fiorentina defender Nikola Milenkovic.

According to Italian outlet La Nazione, United have ‘repeatedly’ approached his agent Fali Ramadami, wanting to know whether Milenkovic wishes to move to the Premier League.

Manchester United aside, Milenkovic also has reported interest from the likes of AC Milan and Tottenham Hotspur.

The Serb is likely to move from Fiorentina this summer if a big club comes in for the 23-year-old, and it sounds like United are wanting assurances from the player which is wise at the early stages of negotiations.

La Nazione (h/t Sport Witness) claim that Fiorentina set a price of €25m for Milenkovic’s sale. His contract is set to expire in 2022, and at time moment in time the Red Devils should be looking to sign a centre back to bolster Ole Gunnar Solskjaer’s defence.

If a defender is brought in next month, it would go a long way towards our chances at lifting a trophy this season which must be the ultimate aim for the manager.

Harry Maguire has had a difficult campaign to date and Victor Lindelof has played alongside him with back problems.

Strengthen at the back and it could be a season to remember.