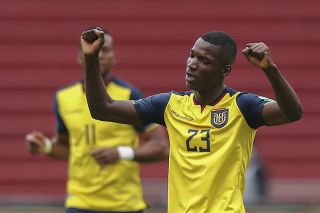 Caicedo, 19, currently plays for Independiente del Valle and operates as a central midfielder.

The talented youngster has reportedly emerged as a winter target for United who are looking to reinvent their transfer policies.

According to a recent report from MEN, United are looking at Caicedo with a view to bringing him to Manchester in January due to work permit and passport regulations.

Independiente del Valle’s highly-rated midfielder has already made his international debut after being called up in October and has since gone on to bag four senior caps.

Domestically, Caicedo has featured in 30 of his side’s first-team matches in all competitions and has been directly involved in eight goals.

MEN claim that United’s interest in Caicedo stems from the fact the club are keen to change their approach to recruitment.

Having already snapped-up a plethora of young guns over the last 12-months, including Facundo Pellistri and Amad Diallo, the Reds’ hierarchy are seemingly keen to continue in their quest to develop the sport’s brightest talents.