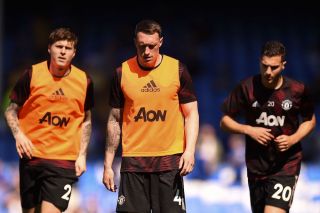 Manchester United centre-back Phil Jones is finally expected to depart the Reds with West Brom and Derby County touted as strong candidates to sign the out-of-favour defender in January.

Jones, 28, joined United all the way back in 2011 and after surviving the reigns of four other managers, the 28-year-old finally looks set to be moved on by Ole Gunnar Solskjaer.

During his near 10-year long time in Manchester, Jones has featured in 224 matches in all competitions and helped his side lift six major trophies, including the Premier League and Europa League.

However, after a series of poor performances and unlucky injuries, Jones looks set for a January exit.

According to a recent report from the Daily Star, Jones is being considered by Sam Allardyce’s West Brom and Championship side Derby County, who are currently being managed by Jones’ former-team Wayne Rooney.

The Star’s report goes on to claim that Burnley are also strong admirers but are only expected to make an official approach for Jones if James Tarkowski departs Turf Moor.

Would you welcome a January move for Jones? – Let us know in the comments.