Manchester United midfield duo Bruno Fernandes and Scott McTominay recently engaged in a hilarious exchange with each other on Instagram.

Both midfield stars enjoyed a hugely successful day at the office when they met rivals Leeds United in Sunday’s Premier League clash.

United cruised to a dominate 6-2 win at Old Trafford with Fernandes and McTominay both bagging braces.

McTominay, especially, enjoyed arguably his best game to date in a United shirt.

The 23-year-old scored a double inside Sunday match’s opening three-minutes and went on to control proceedings both defensively and in attack.

Fernandes, who bagged a first-half goal followed his early heroics up with a spot-kick during the mid-way point in the second-half.

In light of the pair’s impressive performances on the weekend, the Red Devils have now firmly cemented their status as genuine title challengers.

The Reds currently sit five-points off league leaders and arch-rivals Liverpool but do have an important game in-hand which they’ll be desperate to win when they take-on Leicester City over the festive period.

Taking to their social media after Sunday’s exciting match, the pair engaged in a hilarious exchange of words on Instagram. 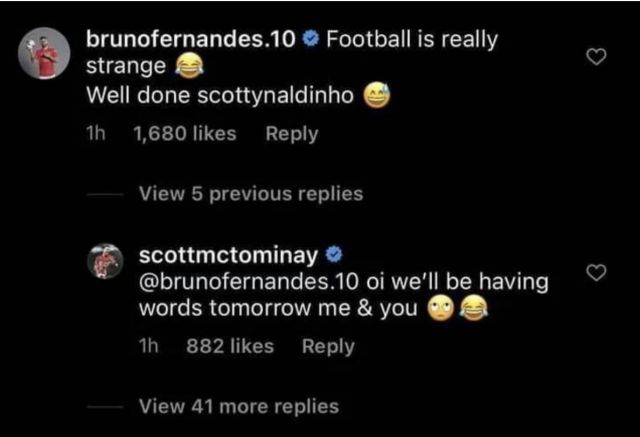