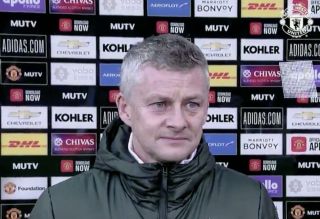 Manchester United manager Solskjaer has revealed how he considers Leeds United’s physical style of play to be the Whites’ biggest threat as the two sides prepare to clash at Old Trafford on Sunday afternoon.

Despite currently being eight-points off Liverpool, United have two important games in-hand and will be desperate to claim another three when they host Marcelo Bielsa’s exciting Leeds United.

Speaking ahead of the hugely exciting match-up, Solskjaer has declared his admiration for his managerial counterpart and has admitted Leeds United’s physical style of play could pose a real threat.

🗣️ “The rotation has to happen because of all the games we’ve played, and the preparation time we have in-between.”

Ole explains the 5️⃣ changes to our starting XI on #MUTV 🎤