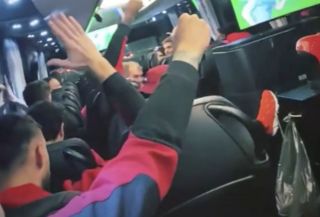 Manchester United’s loanee Diogo Dalot appears to be loving life in Italy after the Portuguese defender witnessed his temporary side remain top of Serie A after securing a 2-1 win over Sassuolo.

In a bid to force his way into Ole Gunnar Solskjaer’s first-team plans, Dalot arrived at the San Siro on a season-long loan during the summer transfer window.

Dalot’s decision appears to be paying off as AC Milan continue to lead the charge for the illustrious Serie A title.

In light of his side’s important win, Dalot took to his social media to post a video of Stefano Pioli’s side celebrating.